At art fairs the first thing most commonly that I hear when people walk into my booth is 'It's like Van Gogh'. Although 99% really like my work and it is complimentary for my work to be compared to a master like Van Gogh, I'm certainly a fan of his works but I would say that he isn't an influence of mine. I'll explain some of the differences artistically.

Van Gogh was a post impressionist and though some of my pieces do venture into post impressionism they are different sub categories of the movement. Van Gogh was the pioneer of Expressionism, which as the title suggests has certain impressionistic elements, but that also intends to express something, often in the colour scheme, the direction and nature of the brush strokes and the unrealistic elements of the composition that is put in entirely for what it expresses. You can see this last point point with Van Gogh particularly with his self portraits and the patterns who uses in the background.

I deal with impressionism and post impressionism, in the subcategory of pointillism. Different from Van Gogh's expressionism. Also if you were to examine an original of mine with an original from Van Gogh you would notice how different our use of paint is. Van Gogh used very thick layers of paint and his art is very textured on the surface. I myself use very thin layers of paint that is often watered down a little to give a blending effect or to add depth. Also as some of my work involves pointillism, I use a lot of very thin brushes which trust me can take forever making tiny marks all over the canvas. Van Gogh often did a painting a day, sometimes even 2. The build up of my composition makes a painting a day impossible.

The only element where I think we are similar is the use of colour. I thrive on bold and saturated colours, just as Van Gogh did, where as the palette of impressionism is often somewhat more understated and pale. This is a deliberate choice of mine and I think it helps give my paintings a certain life that Van Gogh's also has. The richness of the palette draws you in, and that is probably the reason my work is often referred to as similar to Van Gogh in style, but I think this is the only real artistic similarity between us.

See the documentary above for more of his work and life, and see the painting below that most often suggests such comparisons. This painting WAVE has been in a gallery exhibit in South Florida during May/June 2016.

Artist's Have No Inaminated Friends 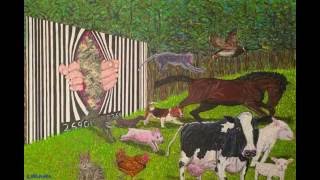 Setting Out My Blog Stall